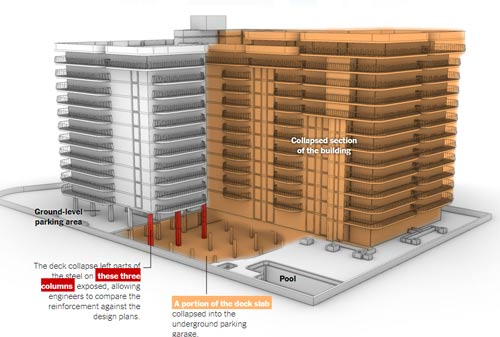 [Nytimes] Engineers who have visited or examined photos of the wreckage of the Champlain Towers South condominium complex have been struck by a possible flaw in its construction: Critical places near the base of the building appeared to use less steel reinforcement than called for in the project’s original design drawings.

The observation is the first detail to emerge pointing to a potential problem in the quality of construction of the 13-story condo tower in Surfside, Fla., that collapsed last month, killing at least 24 and leaving up to 121 still unaccounted for.

Reached by phone, Allyn E. Kilsheimer, a forensic engineering expert hired by the town of Surfside to investigate the collapse, said the investigation was still in its early stages. But he confirmed there were signs that the amount of steel used to connect concrete slabs below a parking deck to the building’s vertical columns might be less than what the project’s initial plans specified.

“The bars might not be arranged like the original drawings call for,” Mr. Kilsheimer said in an interview. He said he would need to inspect the rubble more closely to determine whether in fact the slab-to-column connections contained less steel than expected.

R. Shankar Nair, a member of the National Academy of Engineering and former chairman of the Council on Tall Buildings and Urban Habitat, was among the other engineers who reviewed photographs and saw inconsistencies between the design and the steel that remained visible in the columns.

The investigation of the collapse could take months, so preliminary observations and findings could change. Some engineers said the possible shortfall in steel rebar in the relatively small part of the building they had examined should be seen not as a cause of the collapse, but it could potentially have been one of several factors that allowed whatever initiated the problem to accelerate into a catastrophic failure.

In raising questions about the amount of steel reinforcement in the building, engineers pointed to three damaged columns in a western section of the building that remains intact.

Those columns were part of an exterior deck that served as a ground-level parking area adjacent to a pool plaza. It is a key point of interest, because at least two witnesses have said they saw part of the deck collapse in the minutes before the building toppled.

The condo tower’s 1979 design drawings, provided by the town of Surfside and reviewed by structural engineers and The New York Times, indicate that the vertical columns in many parts of the building were supposed to provide a critical structural connection to horizontal slabs, embedded with eight rods of reinforcing steel — four in one direction, four in the other — near the tops of the slabs. But the reinforcing rods in the parking area, left exposed in many places after the parking deck slab slammed down to the lower level, appear to be fewer in number.

On most faces of the exposed slab, only two pieces of rebar can be seen, half of what would be expected. Three bars are visible on another. 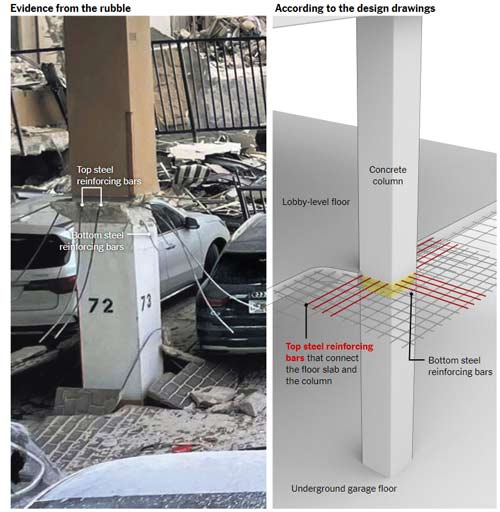 Concrete can support tall buildings only when it is bolstered with steel reinforcement. Concrete is a strong material “in compression,” as engineers put it — in supporting weight above it, for example. But it is far less effective “in tension,” or holding things together when forces would tend to pull the concrete apart. Embedding steel adds that essential tensile strength, and sound design calculations, backed up by building codes, specify how much steel is needed, depending on the type, size and other features of a building.

Mr. Kilsheimer cautioned that it is common in construction for the final product to differ from drawn designs.

He also said more analysis would be needed to assess whether the amount of steel reinforcement used was a factor in the collapse. He is working on computer modeling to address that question, he said.

Some of the engineers who said there was less steel visible in the wreckage than would have been expected based their judgment on a close reading of the design documents for the building.

Mr. Nair, who has over 50 years of design experience, said it was clear from images of the three damaged columns that the structures did not appear to contain the expected amount of steel.

The design, he said, called for running a number of steel bars through the slab of the parking deck, at least four of which would thread in each direction through each of the columns that held both the garage and the rest of the structure on their shoulders. But photos show far fewer passing through the columns, he said.

“There does not appear to be enough steel connecting the slab to the columns,” Mr. Nair said. “What we see out there seems inconsistent with what the drawings show.”

Engineers cautioned that investigators would need to examine the components more thoroughly to rule out the possibility that additional rebar was present but was sheared off in the fury of the collapse. Mr. Nair and other engineers also said it was possible that some bars could have been placed very close to the columns’ edges and left little or no trace that they had been present.

John Pistorino, a consulting engineer in the Miami area who has been in the industry for decades, said that in general, a city building inspector or someone hired by the builder would have examined the placement of steel before concrete was poured.

It is not clear from immediately available records whether the original design of the building met or exceeded building code standards at the time of construction in 1981. Most codes around the country have been strengthened since then, requiring more steel reinforcement.

Florida’s inspection standards were bolstered in the 1980s after the collapse of a building under construction in the city of Cocoa Beach, near Orlando. The standards now require the hiring of an independent inspector for larger buildings.

The development of the Champlain Towers South project was led by Nattel Construction, a firm that has been defunct for 20 years. The company’s leader, Nathan Reiber, died in 2014.

In recent years, the Champlain Towers South complex had been in line for extensive renovations, with a 2018 engineering report identifying rusting steel, crumbling concrete and a flawed pool deck design that would cost millions to fix.

So deteriorated was some of the concrete that during an initial repair project in October, crews were unable to complete scheduled work around the pool. Deterioration had penetrated deep into some components, and excavating it could have affected the stability of that part of the structure, according to a report from the engineering firm Morabito Consultants.

During the collapse, the slab in question at Champlain Towers South, which was suspended in part on the three damaged columns that are still visible, fell to the parking level, one floor below ground level. Inadequate steel “could explain a slab failure — the slab letting go and dropping down,” Mr. Nair said. But he said he did not believe the tumbling slab could have been the initial cause of the larger collapse.

Still, attention has focused on the area around the parking garage slab and pool deck. Video of the collapse suggests that the initial failure occurred somewhere near the bottom of the building, where the garage and deck are located.

In addition, other video from outside the building, taken shortly before the collapse, shows gushing water and what appears to be rubble near the entry ramp to the parking garage.

Gabriel Nir, who lived in Apartment 111, on the first floor of the portion of the building that collapsed, said he came home before 1 a.m. and noticed water pooling at the base of the entry ramp, although that was not uncommon. He did not see any rubble at that point, he said in an interview.

When he and his mother entered their apartment, they heard banging noises that sounded as if they were coming from above.

“We thought people were doing construction,” Mr. Nir said. They initially shrugged it off, but it continued for several minutes, growing more intense.

Mr. Nir said his mother went to the lobby to complain about the noise. He was in the kitchen making food when he heard loud rumbling and saw a cloud of dust coming from the area of the pool deck. He and his sister hurried to the lobby to join their mother and encouraged a security guard to call 911.

Then, walking outside, Mr. Nir saw that a part of the ground-level portion of the parking garage and pool deck — the part that engineers are now scrutinizing — had dropped. He also saw pipes bursting, he said, followed eventually by the collapse of about half the building. He and his family members ran from the site, surviving even as their condominium was crushed at the base of the collapse.

Engineers said it seemed unlikely that having less rebar would trigger a collapse in and of itself, even factoring in significant deterioration over many years. An inherent safety factor built into most projects would mean that a slight reduction in steel content would not necessarily lead to disaster.

The rebar in the Champlain Towers South slabs is a complex mesh, with crisscrossing sets of long, parallel bars set into a plane near the top of the slab and more reinforcement close to the bottom.

Because it is difficult to say which of the lower segments of rebar would have gone through columns, and would therefore be visible in the wreckage after the slab dropped, some engineers have focused so far on the upper bars. The most important clues to what happened are probably still buried in the rubble.

“We have a whole bunch of issues that we think might be part of or the trigger of what happened,” Mr. Kilsheimer said.

The unexpectedly low amount of rebar visible after the collapse of the parking slab was not the only potential problem with steel reinforcement that engineers noticed in their initial reviews.

Dawn E. Lehman, a professor of structural engineering at the University of Washington, noted that rebar could be seen dangling from parts of the remaining structure, pulled clean from the concrete. She said that could indicate that in some places, the concrete was damaged and the steel might not have had a sufficient bond with the concrete. This could have several explanations, she said, including corrosion, concrete deterioration, shear damage to the concrete or the use of a type of reinforcing rebar with weaker bonding properties.

Concrete and steel in the building will eventually be tested, Mr. Kilsheimer said, and investigators will go below ground to examine the soil and test the area with borings. They will model the building with computers and piece together components recovered from the rubble at an off-site storage facility.

Solving the mystery, he said, is like starting with several puzzles, “throwing them up in the air, mixing them up with a broom, and then trying to figure out which piece goes to which puzzle.”