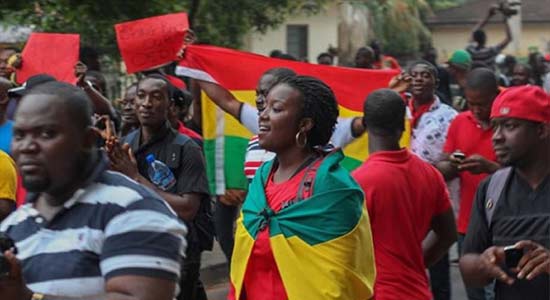 Chanting and waving banners with slogans “Everybody is Suffering, Fix the country” and “Ghanians are Dying, Akufo-Addo Wake Up!”, several thousand protesters marched peacefully in the Ghanian capital.

“The police is filled with tyrants and vigilante groups,” Alisu Ibrahim, a protest organiser said. “They have been killing our people. That is why we are demonstrating.”

Others waved banners attacking economic hardship and joblessness, referencing the #FixTheCountry hashtag that has become a popular social media protest on Twitter in Ghana.

Akufo-Addo won a second term but gained only a small majority in parliament.

He has since been under pressure from political opponents as Ghana struggles with economic woes amplified by the coronavirus pandemic.

Two protesters were shot dead and four were wounded in clashes with security forces in the southern region of Ashanti last month, in rallies over the death of youth activist Ibrahim “Kaaka” Mohammed.

Burdened with growing public debt and its revenues hit hard by the pandemic, the government has introduced new taxes while an increase in the price of fuel has hiked the cost of some essential goods and services.

In May, citing coronavirus restrictions, police blocked a planned protest, but discontent has simmered.

Ghana is often praised as a stable democracy in volatile West Africa and observers viewed the December election as generally free and fair. But the vote heightened political tensions.

The NDC has described both the presidential and parliamentary election as flawed and amounting to an “attack” on democracy.

In March, the Supreme Court dismissed a bid by the runner-up, the NDC’s John Mahama, who had asked for a rerun of the December 7 vote.

Akufo-Addo, the champion of the New Patriotic Party (NPP), won 51.59 percent of the ballot ahead of Mahama, with 47.36 percent, according to official figures.