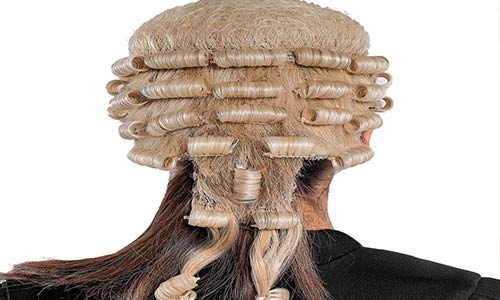 A female lawyer has given an account of why she agreed to remove her bra in the presence of male guards before she was allowed to visit her client in prison in Ireland.

The solicitor was told to remove the undergarment by a male guard who said it had set off the prison’s metal detector.

She described the incident, which took place in front of four male guards and a senior male counsel at Cloverhill Prison, Dublin, as traumatising and degrading.

“Not only did I feel extremely vulnerable and targeted as a woman, I felt humiliated that my dignity had been so casually torn from me,” she said.

In her complaint, the unidentified woman said she complied with the order because the meeting with her client was concerning urgent bail proceedings.

She later discovered a male colleague had been allowed to enter the prison three times without removing his clothing despite setting off the alarm on each visit, local media reported.

The incident on June 11 last year sparked an investigation into the Dublin prison’s security procedures after several women spoke out about experiencing the same treatment.

A former prison guard told the Irish Examiner, which first reported the incident, the practice was widespread.

She described a culture of sexism and said guards targeted ‘people they thing they can bully’, often asking older women to remove their bras.

‘I’ve seen it a million times’, she said.

Several lawyers said they had experienced similar treatment. Others said they would pack sports bras to avoid the humiliation.

Taoiseach Micheál Martin ordered a review after the unnamed lawyer filed a complaint, describing the alleged incident as ‘shocking and unacceptable’.

Speaking in the Dáil (Irish parliament) on Tuesday, Martin added the incident ‘needed to be addressed.’

He said: ‘I can understand why the solicitor in question would have felt her dignity was taken from her and felt undermined by the request,

‘It is not good enough in any shape or form’.

Irish Minister of State Hildegarde Naughton, who is responsible for the Irish Prison Service (IPS), and Justice Minister Heather Humphreys were ‘firmly of the belief’ no prison visitor should be asked to remove their clothing in order to be granted entry.

Naughton said she “awaits the outcome of these reviews, which has been told are being finalised, and completion of the report she has requested from the IPS on this matter.

“When she receives these documents, Minister Naughton will assess what further action may be required’.

“All visitors to prisons, including professional visitors, must be treated with the highest degree of respect, integrity and courtesy at all times”.

The IPS has already said it is not policy to request the removal of undergarments in order to gain admittance to a prison.

A statement said: “The Irish Prison Service does not condone behaviour contrary to our standards of courtesy which may put at risk the rights of people to be treated with dignity and respect.

“Allegations or claims of inappropriate behaviour by our staff are taken very seriously and are fully investigated”.

The service said its policy required visitors to submit to a metal detector, narcotic swab, outer clothing and bag x-ray, and canine drug check, to gain entrance to a prison. (Source: Daily Mail)