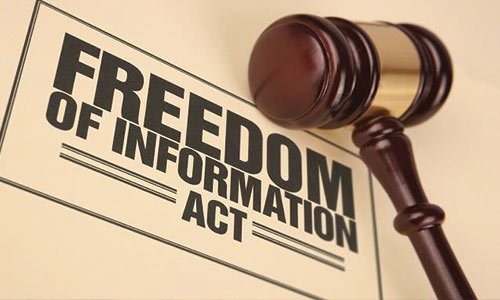 The Federal High Court sitting in Abuja has struck out the suit filed by a businessman and human rights activist, Sesugh Akume, which among other things sought declaration that the refusal of the Federal Ministry of Works and Housing, and the minister (the respondents) to answer to his Freedom of Information (FOI) requests was a violation of the FOI law.

Honourable Justice N E Maha struck out the suit which was marked FHC/ABJ/CS/1383/2019 between Sesugh Akume v Federal Ministry of Works and Housing & Minister, Federal Ministry of Works and Housing on the basis that same was not brought within the 30-day window stipulated by the law, and further awarded N50,000 against Akume for making ‘vexacious’ demands of a government agency.

Akume said he had on 26 July, 21 August, and 8 October 2019, made three (3) FOI applications to the respondents regarding the rehabilitation of the Makurdi bridge; the Katsina-Ala bridge (which had cost 249,908,236.00 (two hundred and forty-nine million, nine hundred and eight thousand, two hundred and thirty-six) naira in the 2017 budget, but went up to 3,775,347,345.00 (three billion, seven hundred and seventy-five million, three hundred and forty-seven thousand, three hundred and forty-five) naira, by 2019–an increment of more than 15 times the initial value– for the very same work not yet fully completed to this day). Also the ‘nonexistent’ Buruku bridge (earmarked for both rehabilitation and construction in 2017, and previously slated for concessioning since 2009); and the nonexistent Quatan Sule bridge (slated for both construction and rehabilitation at the same time in 2017).

Also, he said applications sought to know the status of the Ogoja –Katsina-Ala road, the deathtrap Gboko – Katsina-Ala road, the Makurdi – Gboko road (perennially under rehabilitation), etc, all in Benue; as the minister of works and housing, Babatunde Fashola, had asserted, and widely reported in the media, that contractors had been paid and should be held responsible for completion of the projects.

“The judge was more focused on the technicality of our filing our application in court out of time, which is not entirely accurate, and rather misleading. Two (2) of the FOI applications may not have been brought to court within the stipulated time for redress, but the third was, and ought to have been treated on its merit, as against dismissing all or deeming all three to be one and the same thing.

“Her Ladyship also characterised our pursuit of open and responsive government, a culture of transparency and accountability as making ‘vexacious’ demands of a government agency, which begs the question, vexatious to who; the government agency or she the judge? And further awarded 50,000 naira cost against us for exercising FOI our rights.

“There were hardly any words for the respondents who denied FOI applications, violated the FOI law, wasted the court’s time for over a year without responding to the suit against them; and hardly referred to their watery defence as it obviously lacked merit.” the businessman said

Akume further expressed concern that the judgement is one out of many where courts support disregard for Rule of Law. According to him, the judgement will encourage government’s impunity and lack of openness, transparency and accountability. That it will penalise active citizenship through such punitive measures.

Akume said, “There were hardly any words for the respondents who denied FOI applications, violated the FOI law, wasted the court’s time for over a year without responding to the suit against them; and hardly referred to their watery defence as it obviously lacked merit.

“Today’s judgement is one of numerous examples of how courts oppose the rule of law, encourage and entrench government’s impunity and lack of openness, transparency and accountability, and not only resist but further penalise engaged and active citizenship through such punitive measures.

“It is critical to note that today’s outcome in no way deters us nor dampens our resolve. In response, our lawyer thanked the court for its considered judgment, that we shall study it and take the next steps.

“I am immensely grateful and indeed indebted, learned counsel, my brother and friend, Rodney Adzuanaga, Esq., for his brilliance, grit, tenacity, resilience, sacrifice and industry in diligently pursuing this matter.

“It can only get better. For us it is, NO RETREAT, NO SURRENDER!”