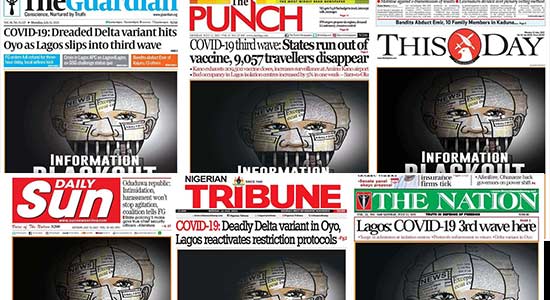 The Nigerian Press Organisation, in its resolve to resist the government’s attempt to stifle the media’s constitutional freedom of speech in Nigeria, has started a front page protest through the publication of a uniform artwork in all of Nigeria’s newspapers.

On Monday, July 12, major newspapers displayed the artwork boldly on their front pages and at the base is written, ‘Information Blackout: This is what the National Assembly wants to achieve with the NPC and NBC (Media) Act Amendment Bills.

“It’s not just against the media…it’s about society’s rights to know, your rights to be heard.”

The message was jointly sponsored by the Nigeria Union of Journalists, Nigerian Guild of Editors and Newspapers Proprietors Association of Nigeria.

The protest, which started on Monday, is expected to continue on July 13, 2021, with all newspapers carrying a front-page editorial “with a central theme – denouncing the government’s attempt to stifle the people’s right to know through its crude attempt to return the country into the draconian era of the military, even as we are in a democracy.”

A statement signed by Feyi Smith, on behalf of the Newspaper Proprietors’ Association of Nigeria (NPAN), after a meeting held in Lagos, said the July 14, 2021 publication will explain why and what prompted the activities of the two previous days.

“It proposes a fine of between N2 million to N5 million to erring purveyors, two years in jail and compensation for fake news while the medium of publication is liable to N10 million fine or closure for one year in addition to payment of N20 million as compensation to the aggrieved party.

“The bill, draconian and anti-press freedom is a poor mix and resurrection of the obnoxious Public Officers Protection Against False accusation Decree No. 4 of 1984 and the Newspapers Registration Decree 43 of 1993, both vestiges of the dark days of military rule. It assumes that there are no extant laws to penalise media infractions and exact restitution for the aggrieved persons.

“The new NBC is no less galling, making the Minister of Information the Monster Minister with sweeping powers to make and enforce regulations online and offline.”

The meeting noted that the bill as currently concorted, “is a sinister, draconian legislative ambush, which seeks to choke the media with exactly those prayers the NPAN has taken before the Supreme Court of Nigeria, seeking relief to unshackle the press in a democracy, and encourage it to from perform its constitutional responsibility of holding the government accountable to the people at all times, as enshrined in Section 22 of the 1999 Constitution, as amended.

“The ambush is amplified by the hush-hush manner of a legislative public hearing which was conducted, without a formal invitation to the key stakeholders- NPAN, NGE and NUJ- while the only one that got an invitation received same at the venue and on the day of the hearing.”

The media stakeholders’ meeting, however, resolved that “that the proposed bill is unconstitutional as it runs against the principle and tenets of the rule of law. That it is subjudice of a pending case on the subject matter before the highest court of the land – the Supreme Court. That it violates the rule of the National Assembly not to deliberate on matters that have been surrendered to the Court for adjudication.

“That the bill seeks to criminalise journalism business and practise despite the surfeit of laws of country with enough provisions and avenues for legal redress where individuals or groups feel ‘offended’ by media reports or business infractions.

“That the bill smirks of an attempt at undue suffocation of the operations of the media business away from the Company and Allied Matters Act provisions.

“That the bill seeks to invest the regulatory bodies with judicial powers, and usurp the powers of the courts.

“That the bill lacks any redeeming feature of a good law as it is discriminatory and offensive to public good and morality.”

The statement said: “On July 12, 2021, All newspapers to stage a FrontPage Protest by publishing a common designed artwork, denouncing government ‘s attempt to stifle the people’s rights to know and freedom of speech.

“July 13, 2021, All newspapers to carry a front page editorial with a central theme – denouncing government’s attempt to stifle the people’s right to know through its crude attempt to return the country into the draconian era of the military, even as we are in a democracy.

“July 14, 2021, Publication of materials explaining why and what prompted activities of the two previous days.”