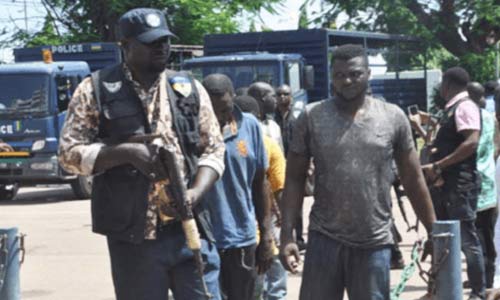 Prosecution in the Offa bank robbery case has shown CCTV video footage evidence of how the suspected armed robbers carried out their operation on April 5, 2018, at the banks in Offa, Kwara state.

The crowd of people in the court on Tuesday was emotional as hooded security officers from the Intelligent Unit of Police command presented the footage at the resumed hearing of the case at the Kwara state high court.

The prosecution in the video relayed how one of the suspects neatly concealed the guns inside a sack, brought it out at the premises of the bank just as the guns were briskly shared among the robbers before they started firing gunshots indiscriminately at customers.

The court was also shown how the suspects used dynamite to successfully blow off the vault where the money was kept.

Led in evidence by the prosecution Council, Rotimi Jacob (SAN), the witness from the Intelligent Unit of the Kwara state Command said the person in the picture from the CCTV footage was the second accused person, Ibikunle Ogunleye.

He told the court that he extracted the picture from the CCTV Data requested from the affected banks by the Kwara state police command after the robbery incident.

The hooded security officer also explained that from the footage, the second accused person was clearly captured covering his mouth and nose with a cloth.

He noted that it took the application of experience and technicalities to be able to track down and identify the pictures of the suspect while in action.

He maintained that all the produced photographs handed over to the police authority assisted them in identifying and subsequent arrest of the suspects.

In his own testimony, a bank official who preferred anonymity confirmed that the total sum of N8.9million naira was carted away from one of the banks.

He said on the 5th of April 2018 in the afternoon they heard sporadic shooting from outside the bank which Indicated an armed robbery and they all ran away through the safety door of the bank.

He said when they return at about 6:39 pm it was discovered that an explosive was used to break both the front door of the bank and the vault (safe) door.

In his submission, the defence counsel, Mathias Emeribe, objected to the admissibility of the picture of the second accused person on the ground that some of the physical features of the accused person are not in the person inside the video.

Despite the objection, the video clip and the flash drive were later admitted as evidence in the court.

Justice Haleema Salman of the court adjourned the case till tomorrow for the continuation of the hearing.