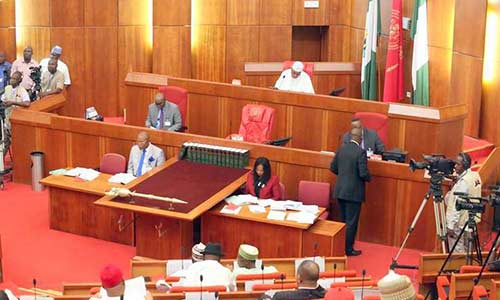 There was uproar on the floor of the Red Chamber on Thursday as lawmakers commenced clause by clause consideration of the report of its Committee on INEC on the Electoral Act (Amendment) Bill 2021.

Senator Sabi Abdullahi representing Niger North had proposed an amendment to Sections 52(2) and 52(3) of the report which proposed electronic voting and transmission of results.

Section 52(2) states that:” The Commission may adopt electronic voting or any other method of voting in any election it conducts as it may deem fit.”

Section 52(3) states: “The Commission may transmit results of elections by electronic means where and when practicable.”

However, Senator Sabi Abdullahi requested the section be amended to stipulate that INEC can only resort to the electronic transmission after the Nigeria Communication Communication (NCC) has certified that national coverage is adequate and secure.

He added that the National Assembly must also approve the decision if INEC decide to push forward with it.

When the amendment was put up for a voice vote, both sides of the vote were close, but Senate President Ahmad Lawan ruled in favour of the amendment.

Senator Albert Bassey kicked against the vote and insisted that the section be kept as recommended by the committee that worked closely on it.

This was also put up to another voice vote, but, once again, Lawan ruled in favour of Abdullahi’s amendment despite how close and hard-to-decipher the vote was.

This decision caused uproar as lawmakers, led by Senate Minority Leader, Enyinnaya Abaribe, rebelled against Lawan’s handling of the proceedings.

The Senate President then requested a closed-door session not to be observed by the media.

After a lot of back and forth, Lawan agreed the Senate be divided to determine the provision of Section 52(3).

The voting is ongoing.