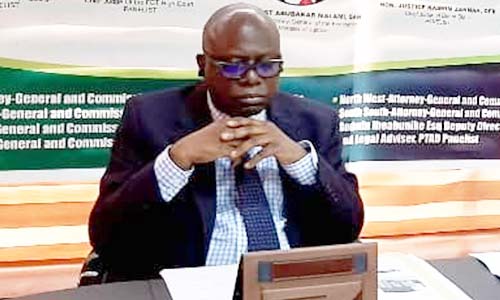 The Federal Government has enjoined stakeholders to renew their commitment to abhor torture; extra-judicial killings as the country commemorate the 2021United Nations International Day in Support of Victims of Torture.

The government also charged Nigerians to adhere to the tenets of the rule of law, describing torture as crime against humanity.

Earlier, a rally to commemorate the event kicked off at the Unity fountain with inscriptions like; ‘Torture is inhuman’ ‘Say no to extra judicial killings’ and more.

Giving the admonition on Thursday at a press briefing, the Solicitor General of the Federation and Permanent Secretary Federal Ministry of Justice, Dayo Apata, SAN told stakeholders to ensure the provision of the Anti-Torture Act find its full implementation in the country.

“It is pertinent to note that this global event is celebrated yearly on the 26th day of June but for technical/safety reasons, it is slated to be marked today to remind everyone that torture, inhuman or degrading treatement universally is a crime against humanity,” Apata noted.

While reiterating further, Apata noted that government has carried out requisite campaign to all security agencies and are fully equipped to bring the scourge to an end.

Part of the measures in place according to him could be seen in the Anti-Torture Act, 2017 which was passed by the 8th Senate and signed into law by President Muhammadu Buhari on the 29th December, 2017.

“This therefore stands out as an outstanding legislation with a sole objective to prohibit punishment, torture and other forms of cruel, inhuman or degrading treatments in Nigeria even if they are on death rows.

“Furthermore, Section 34 of the CFRN, 1999 (as amended) provides that every individual is entitled to respect for the dignity of his person and should not be subjected to any forms of torture or degrading treatment,” the SGF added.

While reminding stakeholders that human rights has been globalized, he cited Nigeria being a signatory to the African Charter on Human and Peoples Rights, (UDHR), saying the federal government has gone further to established national preventive mechanism for its implementation.

In a brief remarks, the Chairman National Committee on Torture, Dr. Samson Ameh told newsmen that collaborations with sister agencies and security agencies has yielded positive result over the years.

“There were reports from Abuja, Bayelsa State and a host of others and we are on top of it,” Ameh said.